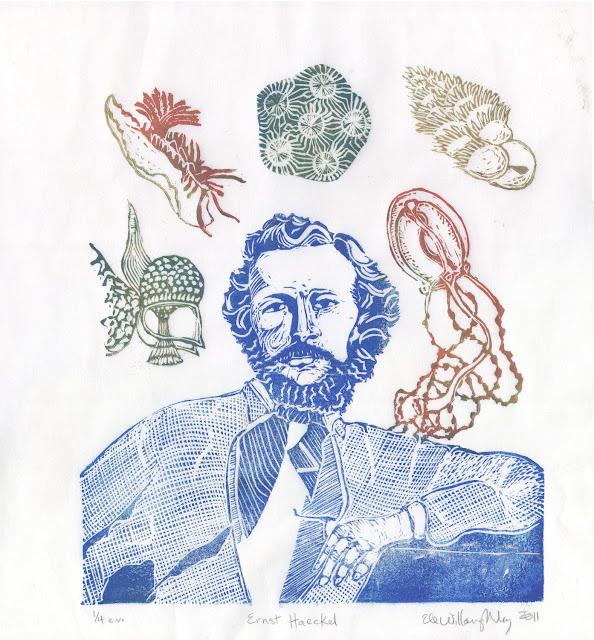 The renowned German scientist Ernst Haeckel (1834-1919) was an early proponent of Darwinism
who did much to popularize the work of the English naturalist in his home country.
His scientific works were praised by Darwin, even though their ideas diverged on several important points,
and his books outsold On the Origin of Species. A member of more than 90 learned international societies,
he was selected as one of the consultants to the Challenger Expedition, the first non-commercial
exploration of deep-sea environment. He coined the terms "philum", "phylogeny", "Darwinism",
and "ecology", and was the first to postulate a missing link between ape and man. 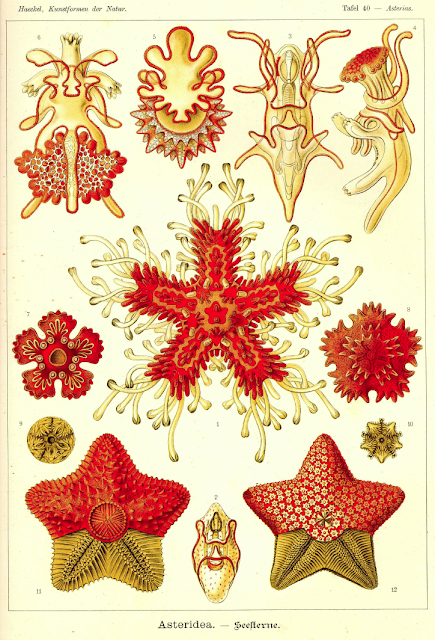 Haeckel was a prolific writer and natural history illustrator, and focused his work on various invertebrates
such as sponges, medusae and annelids. During the 1860s he published numerous taxonomic
volumes describing hundreds of species of radiolarians, an order of unicellular marine microorganisms
that forms part of the Ocean's zooplankton. His 1868 volume Natürliche Schöpfungsgeschichte
(The Natural History of Creation) was a great success and gained him world recognition.
Other titles include Systematic Phylogeny, The Riddle of the Universe, Last Words on Evolution,
and The Last Link. As a scientist and accomplished artist, Haeckel was fascinated with patterns
and symmetry, and found his inspiration in Goethe's belief that both art and science
can lead us to understand the underlying truths of nature. 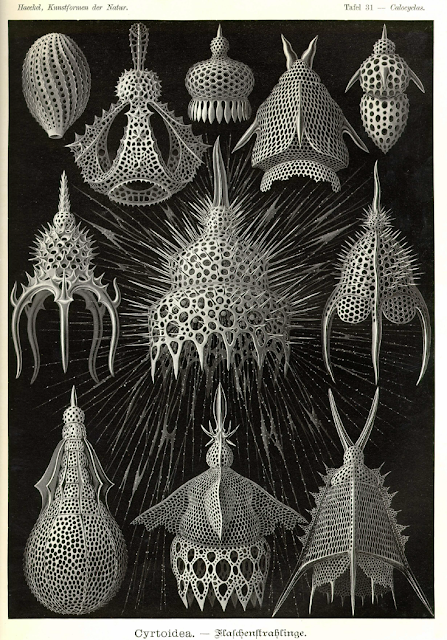 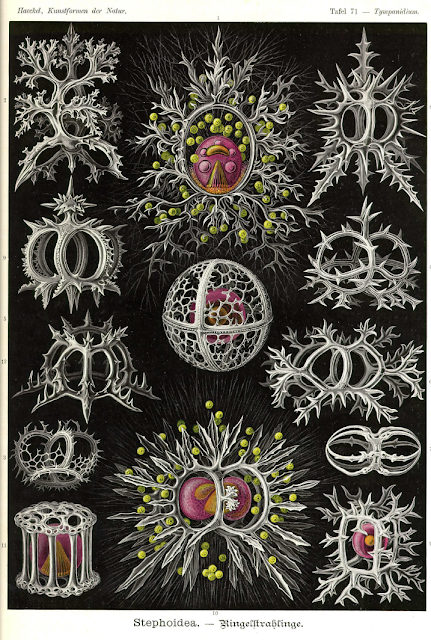 Haeckel traveled around the world on his scientific expeditions, obsessively observing
and drawing aquatic life forms and other creatures. From a series of more than 1000 engravings,
100 colored lithographic plates were chosen to be published between 1899 and 1904 in Kunstformen der Natur
(Artforms of Nature), one of the masterpieces of 19th century naturalist illustration.
While Heackel's depictions of higher animals look rather stiff when compared to the work of other
artists/naturalists, the intricate forms of microorganisms allowed him to display his elegant, dazzling
graphic talent and indulge in his inclination towards order, organization and geometry.
Haeckel's delicate pencil and ink drawings were beautifully adapted for the book by the lithographer
Adolph Giltsch. The subjects of each lithograph were carefully selected and elaborately arranged
to emphasize the organisms' organization and symmetry. 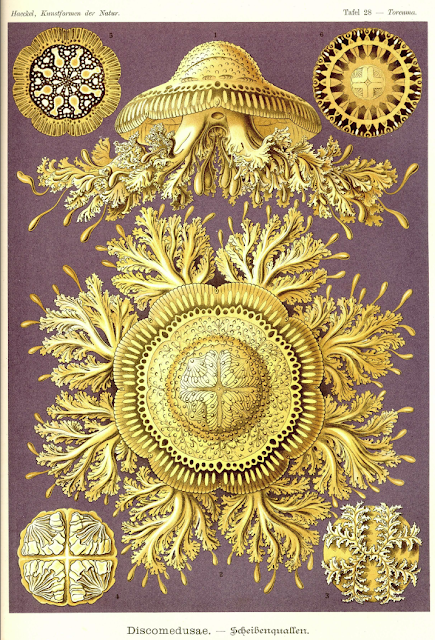 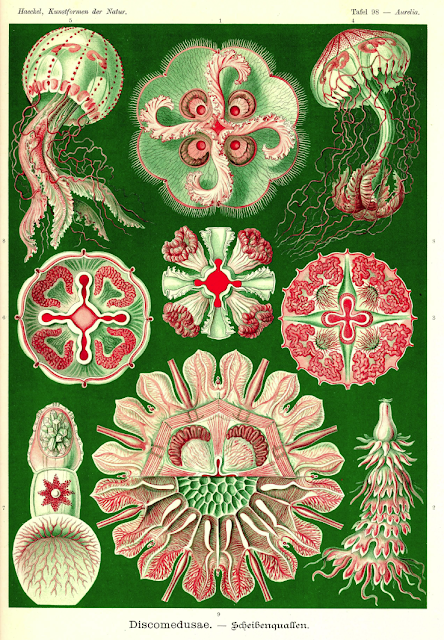 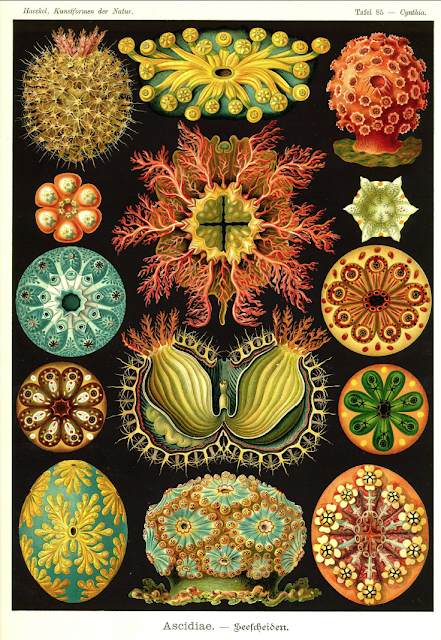 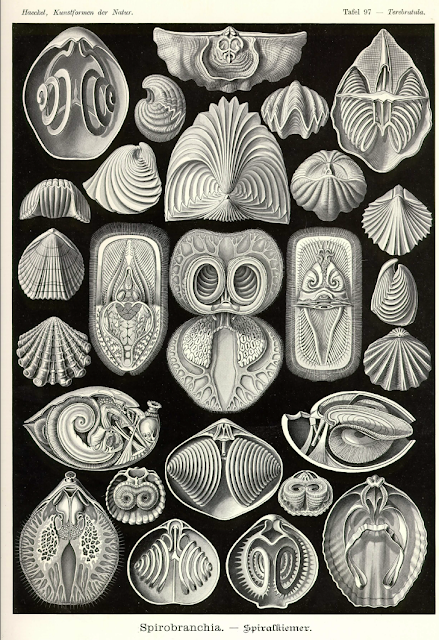 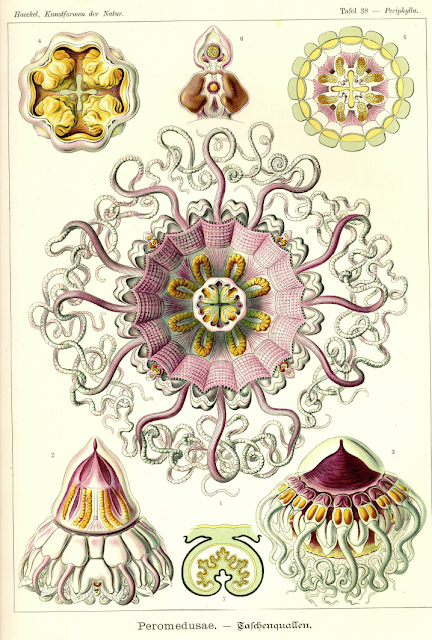 There was debate at the time on whether Hackel's marvelous life forms were over-embellished
and idealized. Their sinuous lines are in fact closely reminiscent of the contemporary Art Nouveau style,
and he certainly utilised distortion, stylization and geometry in his descriptions of organic
phenomena, often discarding scientific accuracy in favor of beauty and decorative effect. 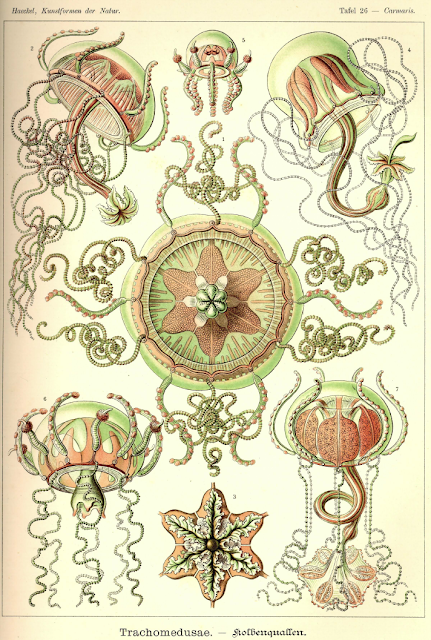 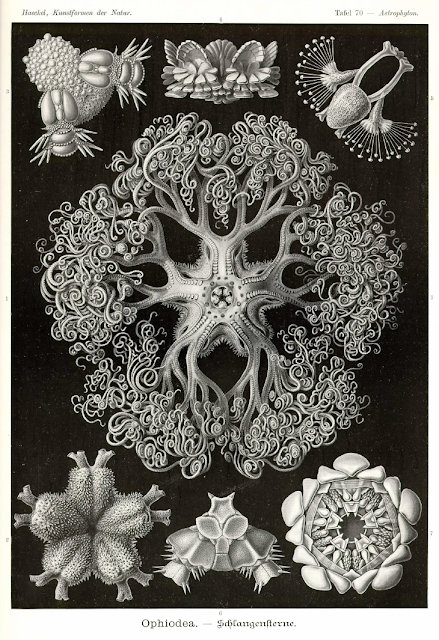 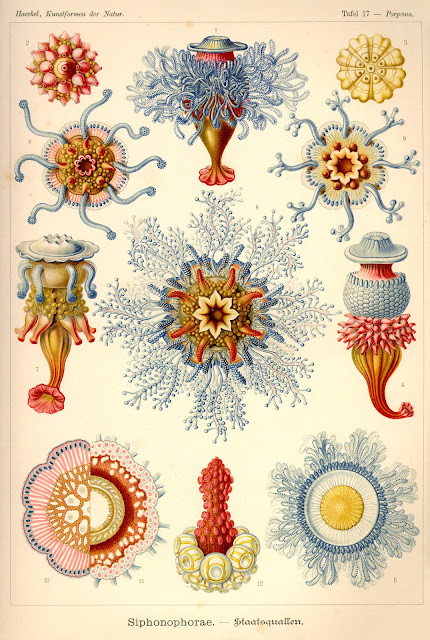 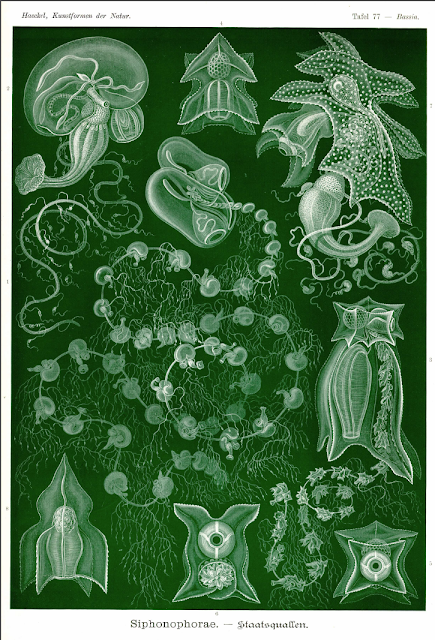 Art Forms in Nature was aimed at the general public rather than specialists, and each plate
was accompanied by a short and accessible commentary. The stunning illustrations gave the book
appeal to a wide audience, and in the decades before World War I the tome was a huge success.
Haeckel's scientific reputation was tarnished when some of his theories were questioned and discarded
due to lack of empirical support, misleading information, and possible data fabrication.
However, his natural obsessions have never ceased to fascinate and inspire artists around the world.